The issue begins with Alan Berube, who has since passed away, and moves into articles from Steven Epstein about HIV politics and then one about aging lesbians. These provoked thoughts of absences, as many people and organizations of the HIV and LGBTQ movements are gone, but we still feel their presence.

I never got to say goodbye.

I met Alan Berube through the great LGBT academic connector, Jeffrey Escoffier. Alan was sweet, and a diva, and usually surrounded by adoring fans. At least that’s how I knew him. I don’t know what he was like beyond cocktail parties and academic lectures.

Some people we only know from the shape of their writing or art: their public life becomes the outline of their identities, who we come to know after their passing.

I was lucky enough to meet Marlon Riggs, Assoto Saint, Essex Hemphill, Wayne Corbett, Reggie Williams, Doug Yaranon, Sean Sasser, Chris Turnbull, Tede Mathews, Juan Rodriguez… a host of artists, activists, and scholars not here anymore. I held their hands, clumsily flirted with many, and mourned them. What does this imprint do? Does this parade of the dead add an aura of authenticity? Should I tell you a story about them? I was 20 at the time I met most of these men and, like most 20 year olds, I was not aware of how little I knew. But it is all I have.

Today, I miss them. More – I miss the opportunities for collaboration, friendship, arguments, and fun. I believe I loved more freely then.

They left HIV behind and I was still in it. The organizations that I helped build, that I had worked at for twenty years … many are gone or have removed HIV from their name or mission statement. National Task Force on AIDS Prevention, Proyecto ContraSida Por Vida, National Association of People with AIDS, Lifelong AIDS Alliance, AIDS Prevention Michigan, Asian AIDS Project, LLEGO, Ohio AIDS Coalition, People of Color in Crisis, Asian Pacific Islander HIV/AIDS Coalition, National Minority AIDS Coalition, and more. We envisioned a world where HIV was cured, where we built a healthy community that engaged racism, economic justice, sexism, and homophobia. Mission statements do not always change because of success. Where do visions go when they pass?

I used to keep a list of names but I don’t know where I left it. The list continues to grow but my memory of each wavers. It’s the emotional resonance I feel now that is important. I don’t need to bring each name forward as if this were a mausoleum and my job to curate the dead.

I won't get to say goodbye.

I wish there was some way for you to meet the men I’ve known both platonically and intimately because they were amazing, even the ones I forgot (or whose names I never asked). But what will you want to know? Would it help to know that I found love at 23, that it would break when I turned 27 or 28 but we remained intertwined through life? What about my journey from activism to academia? Would my successes or many failures be of more use? Will you only know me and the surrounding constellation through my writing or the stories people know about me? I’ve been rich with social connections – with family I was born into and the ones I chose – so I hope that they’ll have something to tell you.

Would you even know that I lived?

I never knew to say goodbye.

They were there. I read about them, seen the world change in their passing, benefit from their living, and witnessed the trauma some of them left. There are limits when we start to look at our histories – who was recorded, how they were recorded, who did the recording: these are all factors that determine how well we know the stories. The holes in our family stories were people and events that affect the way we can know each other. If we’re lucky, we have a picture to hold the focus. When I look at porn or lesbian or gay calendars from the 1970s and 80s, I wonder what happened to these people, what they did with their lives, and what they didn’t.

Is it bad to make up the rest? We wonder, fill in the cracks, imagine their hug, listen to what they might say to inspire or critique. Summoning up spirits to comfort.

Are we less than if we don’t know our history? Is there a value for those who know more? Or do we question what they know and how, since we are painfully aware of how fickle memory is, how easy it is to lose a person, to be forgotten. We know even the absence leaves a mark. 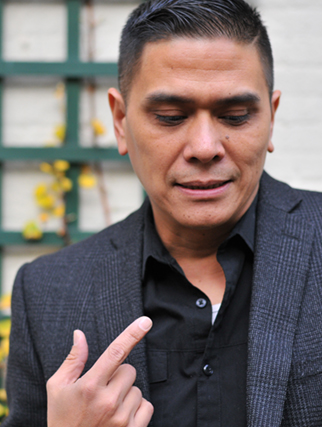