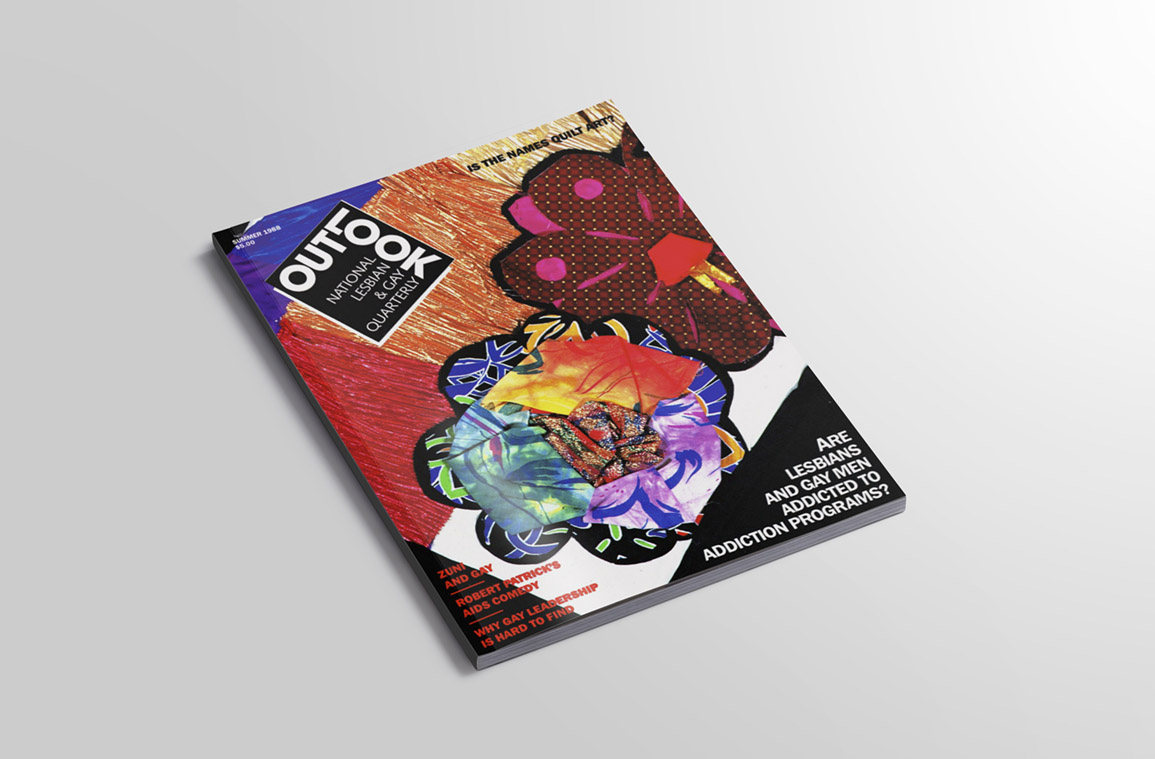 I’m contributing an essay/reflection on the near-total absence of trans-anything in OUT/LOOK, coupled with autobiographical riffs on remembering being part of the SF scene in those years, and living intimately with the afterlives of OUT/LOOK in the years since.

Locating Ourselves in the History of Sexuality

I live intimately amidst the afterlives of OUT/LOOK, and in the queer world it helped to birth.

Above my kitchen sink, in the Arts and Crafts house I’m lucky to live in near Precita Park on the border of the Mission and Bernal Heights neighborhoods in San Francisco, the cupboard holds an old OUT/LOOK coffee mug still in surprisingly good condition, along with another, a bit more chipped and worn from frequent use, from the magazine’s 1990 OUT/WRITE conference. In the laundry room off the kitchen, two original drawings by OUT/LOOK’s resident cartoonist Kris Kovick hang above the toilet. Upstairs, there’s a nook on one side of my bedroom with double French doors that open onto what was once a nanny’s room, perhaps, or a really big walk-in closet, that now holds a Morris chair where I sit and write—where I’m writing this. In 1988, this little room was OUT/LOOK’s first editorial office, and my partner and her ex were two of OUT/LOOK’s founders.

For this project on “The Birth of Queer,” I was assigned to respond to OUT/LOOK #2, Summer 1988. As I scanned the table of contents, pondering what I’d write about, my eyes settled on Jenny Terry’s “Locating Ourselves in the History of Sexuality.” Terry, now a professor of Gender and Sexuality Studies at UC Irvine, was then a graduate student in the UC Santa Cruz’s paradigm-busting History of Consciousness doctoral program in transdisciplinary cultural studies—itself an important “birthing site” for queerness. Her contribution to the issue was a substantive book review essay on important scholarly work in the history of sexuality, along with a thoughtful reflection on the importance of historical knowledge for people whose very existence often fails to be registered in the historical record, or has been actively suppressed or expunged.

Rereading Terry’s article, I remembered reading it for the first time more than a quarter-century ago, when I was a relatively recently publicly out young queer person with a freshly minted Ph.D. of my own in U.S. history. In those years I was devouring everything about queer culture I could lay my hands on, including the entire run OUT/LOOK—a complete set of which I’d managed to score at OUT/LOOK’s wake in 1992, when the slightly-ahead-of-its-time publication finally succumbed to financial reality and closed up shop after 13 issues, just before “queer” became a marketable demographic niche advertisers were eager to woo. I remember projecting myself into the world that OUT/LOOK envisioned, and considering it my own.

Reading Terry’s article again in 2017, two things struck me. The first was how remarkable it is, even now, to find writing that successfully bridges academic and popular audiences. OUT/LOOK was smart, and took its readers seriously. Terry’s article, written with an educator’s patience and enthusiasm for her subject matter, explained complicated ideas without watering them down, reviewing two dozen works by Michel Foucault and a bevy of other historians whose names have become canonical with the study of the queer past: Jeffrey Weeks, Estelle Freedman, George Chauncey, John D’Emilio, Jonathan Katz, Martha Vicinus, Martin Duberman, and others. In doing so, she captured a moment in a community’s collective self-awareness when ideas about “social constructionism” were beginning to acquire the status of common knowledge rather than specialist discourse. That shift itself was a big part of the conceptual transition from the gay liberation generation, whose historical sensibility was more driven by an essentialist notion of a timeless but largely lost homosexual identity needing to be excavated from the rubble of the past, to the new queer perspective that emerged thirty years ago.

The second thing that struck me about Terry’s article was how utterly, utterly lacking it was in attention to the transgender dimensions of queer history, how trans people were not imagined to be among those to be “located” in the history the article recounted, or even to be among the “ourselves” being addressed. I remembered not only reading and projecting myself into its narratives, but also the difficulty of doing so—of claiming my lesbian identity even while needing to put an asterisk next to it that marked the ways my transness made me a different kind of lesbian, because I had arrived at social womanhood along a path most women simply hadn’t walked.

I attach no blame to the observation of trans-absence in that 1988 article. It wasn’t until a few years later that “transgender” burst onto the queer scene—Leslie Feinberg’s pamphlet Transgender Liberation: A Movement Whose Time Has Come didn’t hit the streets until 1992, the same year that Transgender Nation emerged as an offshoot of San Francisco’s Queer Nation. There was as of yet no intelligible demand being made of cisgender people, gay and straight alike, to acknowledge the trans presence in their worlds. I remember assuming, for so long, that any attempt at recognizing myself in history, culture, media, or art would require some act of translation, and thought nothing of the invisiblized labor of working myself into a story that did not expect me, and sometimes did not welcome me.

Still, it was surprisingly discomforting to confront the totality of that absence. Quite literally: in the place where I now make my home, both metaphorically and literally, in the very spot where the words I was reading were edited and laid out on the page I held in my hand, people like me—trans people—were absolutely outside the frame of reference, unpresent and unlooked for.

Seen in hindsight through the eyes of someone who has spent the last few decades delving into transgender history and its fraught intersectional relationship with gay, lesbian, and queer cultures, Terry’s words held a rich irony for me. She wrote of how “We lesbians and gay men are people whose existence and survival has been threatened by forms of cultural and political censorship and amnesia.” All I could think of was the violence of the exclusions through which a generation of cisgender gays and lesbians came to understand themselves as having nothing to do with trans folks. I thought about the wave of expulsions of trans lesbians like Beth Elliot from women’s organizations and events in the early 1970s, as a more radical and expansive vision of sex/gender liberation in the 60s morphed into a more reactive form of identity politics. I thought about the history of San Francisco’s Pride Parade, which began in 1972; its organizers traced the origins of gay liberation in that city not to the 1969 Stonewall uprising in New York, but to a riot by people it called drag queens and street hustlers at Compton’s Cafeteria in San Francisco’s own Tenderloin neighborhood three years earlier, in 1966. That first march and rally in 1972 welcomed trans people and street queens; within two years, respectability-oriented gays and lesbians took over the organizing efforts and banned trans participation, and the riot at Compton’s became disremembered. Not until 1995, when SF Pride added the T to its LGB, were trans folks ceremonially folded back in to the imagined community of prideful queers. It would be yet another decade before knowledge of the Tenderloin’s history of trans militancy would be recovered and disseminated in a way that let a new generation begin to remember it the same way they remembered Stonewall.

Chela Sandoval, another alumnae of the History of Consciousness program at UC Santa Cruz around the same time Terry was a doctoral student there, proposed a powerful way of thinking about what queer means and does. In Methodology of the Oppressed, she delves into the word’s etymology, pointing out that at root it means to turn or twist, and going on from there to develop the concept of the “queer differential.” In a car’s engine, the differential is the mechanism that turns the up-and-down motion of the pistons into the round-and-round motion of the axle that spins the wheels. Queerness, as Sandoval conceptualized it, performs just such a differential task: it takes the negative energy directed at people stigmatized for being nonnormative and turns and twists and redirects that negativity though an affective jujitsu move that transvalues and transmutes it into a positive force for social change that moves back out into the world in a new direction, in a way that makes those stigmatized lives more livable. Queerness is a way of relating to the world, not an identity—it something more than, and something other, than simply being gay or lesbian.

Just because the gay and lesbian world of the late 1980s didn’t see trans coming doesn’t mean that the spaces then opening up in that world would not be receptive to the new demands soon to be articulated by the trans people who already shared space in bars, cafes, collective households, dungeon space, dance parties, AIDS wards, and hospices with the people OUT/LOOK imagined, at first, to be its audience. Those very demands for a more expansive politics of resistance, and a more expansive sense of community, are an important part of what made queer culture a point of departure from the gay and lesbian past that preceded it.

Queerness, in part through its openness to transness, became a concept that enabled a deeper and broader critique of heteronormativity, helped create the possibility of renewed political alliances across gender and sexual identities, and gave rise to new forms of sociality that had a bigger place in it for me. The trans-centric world that had been available to me in the 1980s, before I was publicly out and before queer became a thing, seemed like a very sad and lonely place, populated almost exclusively by depressed people attending support groups, trans-sisters selling their asses in seedy bars just to stay alive, and psychotherapists asking us why we felt the way we did. The queer moment, in which OUT/LOOK played a vital role, broke that subterranean space wide open.

One queer afterlife of OUT/LOOK, for me, is that a different kind of home became available, one that I can locate myself within. Not just the physical house where I write these words, but a history made by a heterogeneous people who vitalize a world I share, “our” world, a world I know that I am part of, in all of my dimensions.

The queer world that burst forth more than a quarter-century ago took shape in response to the AIDS crisis, to twelve years of the Reagan-Bush regime, the ascendency of neoliberalism and the transnational globalization of capital after the collapse of the Soviet Union, and the first explicit U.S. wars since Viet Nam. The world that many of us made together in opposition to those violences is now under threat in new and dire ways. All of us who live here now must draw on all the insight and power our rich shared histories can offer us as we face an uncertain future together. But this we know: we have survived before, and turned what has been directed against us into new and better ways of living. It is time for yet another queer turning as we rise to the challenges of this new day. 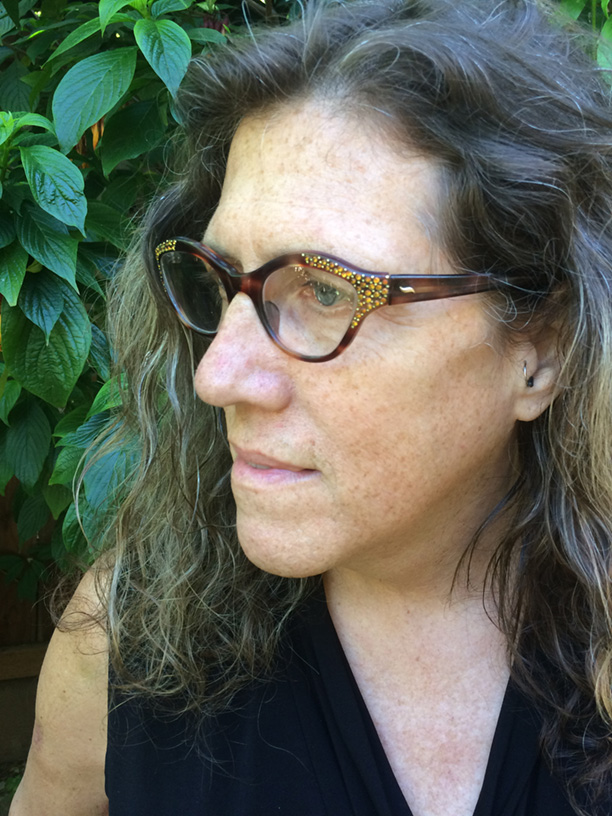